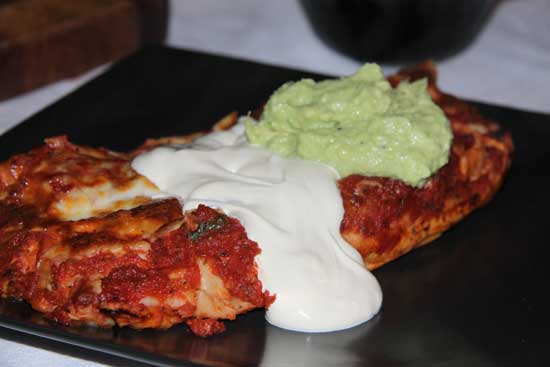 Once, a month, the Mexican bug bites and I just can’t say no. I JUST LOVE MEXICAN FOOD. I think somewhere in my previous life I was a mixture between a Mexican/Spanish Senorita and a Middle-Eastern Princess. I think my love for these cultures started when I was 7 and I saw Spanish dancers in our local mall doing their thing. I turned to my mom and announced that I would also do that…I would be a Spanish dancer. After 7 years of practicing the castanets and the footwork and going through  bottles of La Pebras, I decided to give it a break and focus on High School.

I went through High School not really thinking about dancing (as I was too pre-occupied with my new found love of Make-up, fashion and University boys). I went off to study Make-up and Special effects in JHB, and after my mom passed away in 2005 a friend suggested I join her for a Belly Dance class. I was very excited but very nervous as I hadn’t had a dance class in almost 5 years then but I was determined to succeed. The moment I tied the ‘Shimmy’ belt around my hips and felt the rhythm moving through my feet up my legs and into my hips, I knew I was in love. Never in my life have I felt sexier, more powerful and more feminine than when I was doing Belly-dancing.  I am saddened everyday that I had to give it up due to falling pregnant with my gorgeous twins, but I know one day I will return to that studio and on that day,  I will shake my hips like there’s no tomorrow!

But back to the food, I’m sure that’s where my love of all things Mediterranean/Middle-Eastern/Indian comes from. I was also very blessed to have a mother, who although hated cooking, loved foreign foods and always encouraged us to eat Dolmades, Hummus, Spanakopita, Paella & Curries. (My mom’s favourite cuisine was Greek)

So last night I gave into my craving and I made Spicy Vegetarian Enchiladas for us and Chicken, Spinach & Corn Quesadillas for the twins. I was in heaven every time I took a bite of the warm and spicy Enchiladas.  Utter Perfection!! (Don’t forget to serve them with a good dollop of both Sour Cream and Home-made Guacamole)

In a Wok/Large pan, fry the Baby Marrows and Garlic until slightly golden. Add the Spinach, Red Chillies, Salt and cumin and fry until the Spinach is wilted. Place in a colander over the sink so that any excess fluid can drain off.
In a bowl, mix the Tinned Tomatoes, Cumin, Sugar and Salt and set aside.
When the Spinach mixture has drained, mix in the Corn, Beans and 1 cup of the Mozzarella.
Heat the Wraps by wrapping them in Foil and putting in a 180°C oven for 10 minutes.
Place 2-3 tbsn of the Vegetable mixture in the middle of the wrap and roll up. Place, seam-side down in a greased oven dish. Repeat until all 8 wraps are done.
Spoon over the Tomato sauce and sprinkle with Mozzarella.

Bake for 30 minutes at 160°C until the Mozzarella is golden.
Serve with Guacamole & Sour Cream.

(For the Guacamole, mash 2 ripe avo’s with 2tbsn Lemon Juice and salt & pepper) 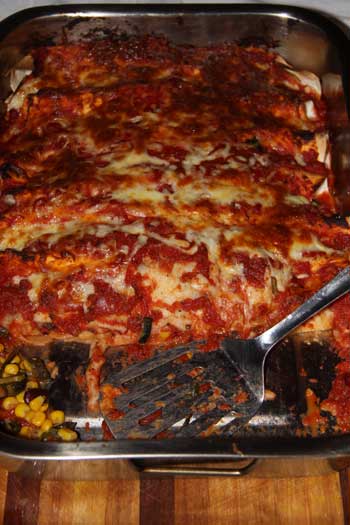