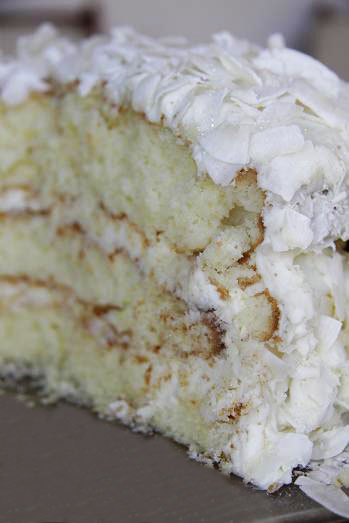 And now, in the last of the birthday feast installments, I’m sharing the recipe for the gorgeous Coconut Cake with you. Although, it’s not much of a recipe because I committed one of biggest culinary ‘faux pas’ ‘ of my life. I used a pre-mix. Also known as Box Cake. I was very eager to bake my own vanilla cake but as I stood in the baking aisle of the supermarket packing the flour into my shopping basket, I spotted the box cakes and just instinctively grabbed 2 boxes. I mean, I’ve had it before and it’s pretty darn good AND I had so much to do. Lamb and chicken to marinade, egg whites and cream to whip and Naan to make. I didn’t have the time to mix my own 3 layer cake. And after all, the icing and the filling is what makes it ‘Coconut Cake’. So I manipulated my brain to think that the box cake was the better choice and carried on without any guilt. (Ok, maybe a little guilt!)

I used 2 boxes and it gave me 3 layers (I used a 20cm pan, I think) and then, EVEN WORSE, I used the pre-mix icing it comes with. Instead of adding milk, I just added coconut milk. I know, I KNOW! It’s terrible. But you know what? It actually wasn’t. It tasted pretty darn good. So here’s my ‘recipe’ for coconut cake.

Ps. This cake really is gorgeous and I have never gotten as many compliments for my baking as I did with this cake!