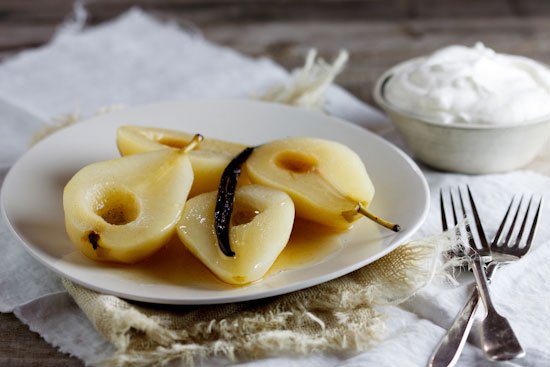 I’m not usually the biggest fan of the humble pear. I think they are beautiful to look at and every photographer’s dream, but I have never loved their texture or flavour. I find them to be either rock hard or so soft and furry, eating them reminds you of chewing on a mohair blanket. Not exactly appetising! 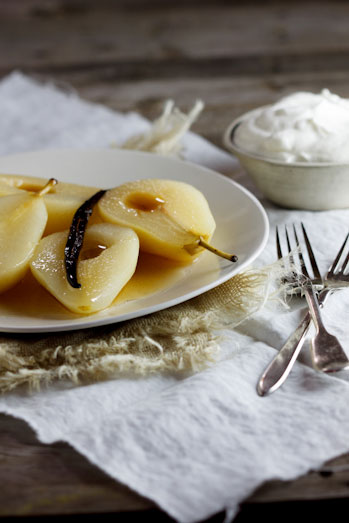 However, when pears are poached, they take on a whole different persona and it’s one I quite like. Their flavour becomes more pronounced as they absorb the poaching liquid ever so gently and their texture becomes pleasant to eat. 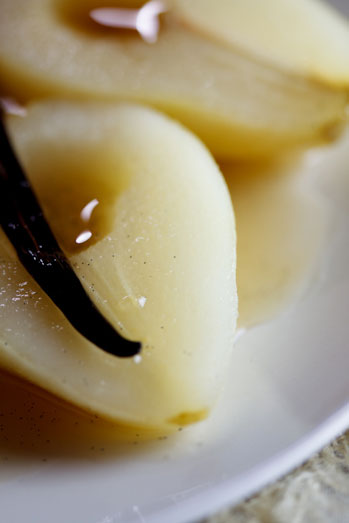 I chose to poach the pears in a ‘stock’ made from Pinot Grigio, water, sugar and a fresh vanilla pod (the seeds I had scraped out and reserved for the ‘mousse’ that would be served with the pears). I also decided to slice the peeled pears in half and scoop out the seeds instead of leaving them whole as is often done. I did this because I think the halved pears look so much more beautiful served but also because they cook so much quicker. I allowed the pears to poach for 10-15 minutes until the tip of a knife could be easily inserted. You want the pears to be cooked but still keep their shape.
As for the vanilla ‘mousse’, I call it a ‘mousse’ as it’s made in the same way as I start all my mousses but instead of leaving it to set I simply chilled it in the fridge for 20 minutes while I got on with the pears and then served it, while still soft but airy, with the pears and the reduced syrup made from the poaching liquid. 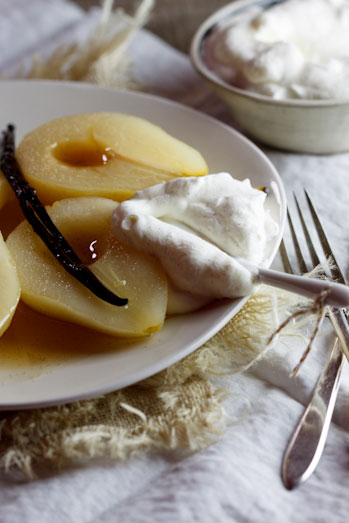 This would make a delicious and simple dessert for a chic dinner party but I quite enjoyed eating the ‘uglier’ pears, stove-side, as I got ready to style and shoot their prettier brothers and sisters.
Serves 4
for the vanilla ‘mousse’
3 egg whites (I used extra-large free-range egg whites)
4 T caster sugar
250ml cream
seeds from 1 vanilla pod
for the poached pears
4 pears, peeled, halved and cores removed
1 1/2 cups white wine of your choice (I used Pinot Grigio)
enough water to cover the pears (approximately 750ml)
3/4 cup sugar
1 vanilla pod, seeds removed and kept aside for the ‘mousse’