My gran’s turkey with herby bread stuffing is an easy recipe that makes for an excellent centerpiece on your holiday dinner table.

Christmas morning was always a mixture of being tired and being excited. Tired because we always had a big Christmas Eve party where we would exchange gifts with the family (a few gifts were kept for Christmas Day) and were allowed to stay up late. The excitement I felt was, of course due to the extra gifts but mostly I was excited because Christmas Day meant even more family (seriously my favourite thing in the world), swimming and my Gran’s turkey with bread stuffing.

Because it’s always so hot in SA during Christmas, my gran would serve her turkey at room temperature but the stuffing was always hot. She used to remove the stuffing when she carved the turkey and keep it warm in the oven. It was never strange for us to have turkey on Christmas day because that was just the way it was. I know for some it’s weird but I’ve known it all my life and so, I continue this tradition now that my gran isn’t around to cook us a turkey every year. 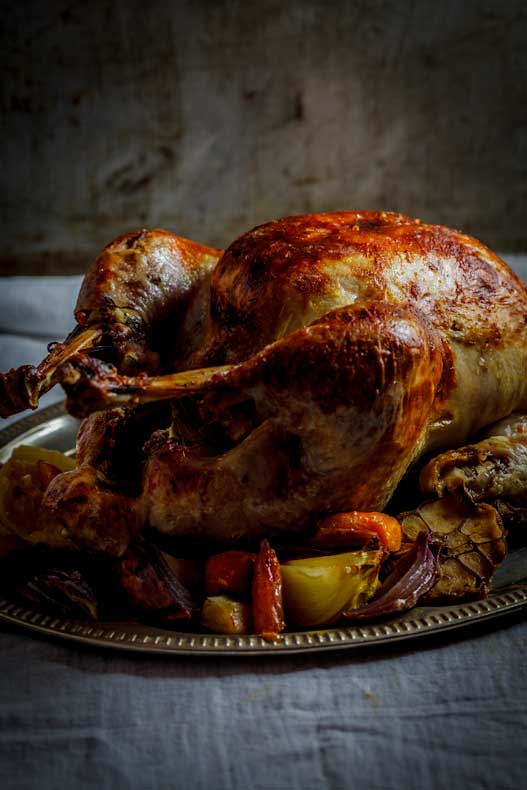 My gran’s turkey was always incredibly moist and so flavourful and the stuffing was moist and rich. This was because she actually stuffed the turkey with it but I prefer to bake it separately in a loaf tin. I do this because the turkey cooks a lot quicker when it doesn’t have stuffing in the cavity. Instead, I place half an onion and lots of fresh herbs in the cavity to flavour the turkey from the inside. I also roast the turkey surrounded by onion, garlic, celery and carrots. This not only flavours the turkey but also ensures a fabulous base for your gravy.

I’ve found that the key to the perfect roast turkey is to remove that little red thing that pops up when the turkey is supposedly ready. That little thing is a liar! It’s ‘programmed’ to pop up at 180°c and by that time your turkey will be a dry, sad little thing. I remove my turkey from the oven when the white meat has reached 160-165°c on my meat thermometer (sometimes even around 157°c) because the turkey will continue cooking as it rests. When you cut into the bird, the juices should run mostly clear with a tinge of pink before you allow it to rest. I rest my turkey for 30-45 minutes under foil and a tea towel before I carve and serve it.

By this time the juices would have re-distributed into the meat and there will be some juices in the roasting pan which I tip into my gravy when I re-heat it before serving. While the turkey is resting, I bake the stuffing so that it’s nice and hot by the time lunch is served. This year, we’re doing more of a hot lunch so I’ll be serving the turkey and stuffing with cauliflower cheese, roast potatoes and green bean & feta salad followed by a plethora of puddings. It’s guaranteed to be a very merry Christmas! 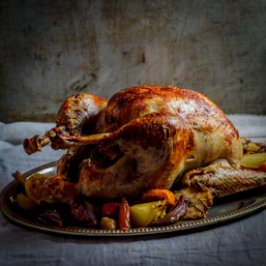