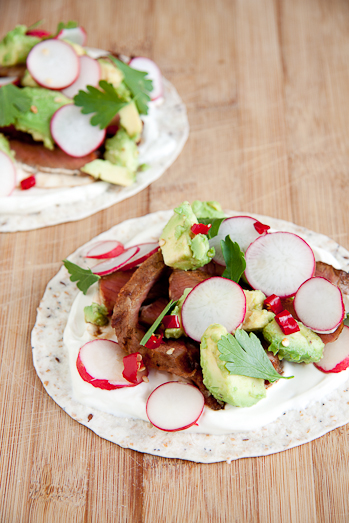 The weather has been thoroughly miserable in Gauteng this week so far and I am the type of person who’s emotions are directly linked to the weather. When it’s sunny outside (even if it’s icy cold) I feel cheerful and happy but when the skies are dark grey and gloomy, my mood reflects that. That’s the one reason I love living in Pretoria so much. We very rarely have cloudy miserable days during winter which is just the way I like it. 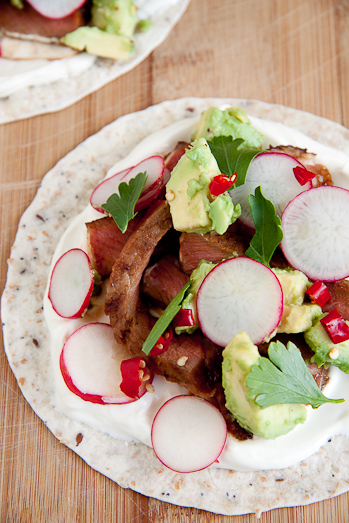 Of course, I can’t control the weather but I can control the food we eat so last night I decided to take a summer-y approach to a few sirloin steaks I had in the fridge and I decided to make spicy steak tortillas served with sour cream, avocado and radishes. I often make tortillas/taco’s/wraps for dinner during summer as there’s usually only one component that needs cooking, which is the protein. And in this case, the steaks literally took minutes to cook as I wanted them rare and juicy. Of course, you should cook them to your preference. On a side note, I’ve noticed that I’ve gone from liking my meat medium in my teenage years to medium rare in my early 20’s and now I love it rare. But one thing I can’t stand is when people say there is ‘blood’ on their plates. One thing that home-economics taught me was that there is no ‘blood’ left in the meat, it is called “sarcoplasm”. If you’ve ever seen proper blood, you’ll know it’s not the same thing. (as Ellen Degeneres would say, “You’re welcome home-schoolers!”) 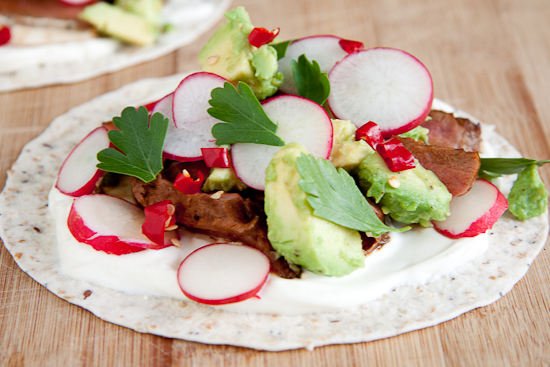 The other components of the dish is really a matter of what you have in the house. During this time of the year I find myself always buying avo’s and as a radish lover (I like eating them whole, dunked into chunky cottage cheese) those two were the first to catch my eye last night. I added a smear of sour cream for a bit of tang and to add some moisture to the tortilla but you could use cream cheese, cottage cheese, mayo, even hummus. Any veggies go and as for the actual tortilla wrap, this can be substituted with a pita if need be. And if you’re not into steak, pick up a rotisserie chicken on the way home and shred it into rough chunks. 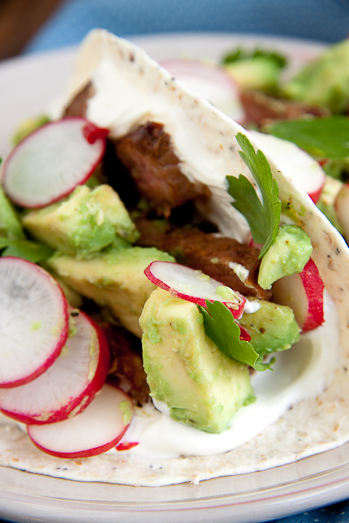 Let’s hope this meal is enough for the sun gods to be kind to me and my mood. I’ve never heard of someone doing a ‘sunshine dance’ but I’m willing to give it a go…