Creamy corn chowder served with crispy bacon dippers is like sunshine in a bowl. And dipping crispy bacon into it? Just genius.Yes please! 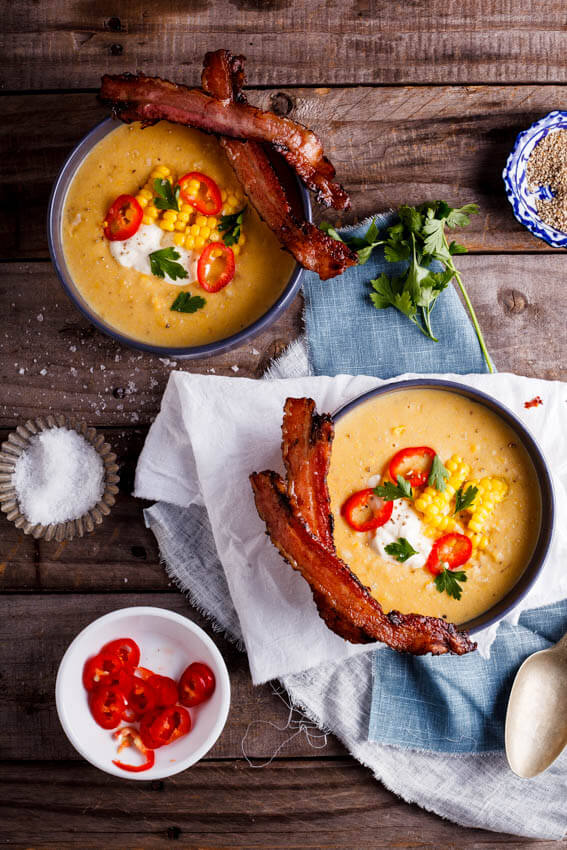 Whether you are in the throws of summer with all its wonderful produce and bright, sunny days or in winter with its comfort food, scarves and fluffy blankets, corn chowder is always a good idea. How can a bowl filled with sunshine ever be a bad idea? And that is exactly what corn chowder is. Edible sunshine.

I’ve been wanting to make corn chowder forever and finally got around to it a couple of weeks ago. I wanted to celebrate the  really good corn we get in summer but wanted it to be comforting and warming as well. Chowder was the best of both worlds. I also love how absolutely simple chowder is to throw together, even though it might not seem it at first glance. 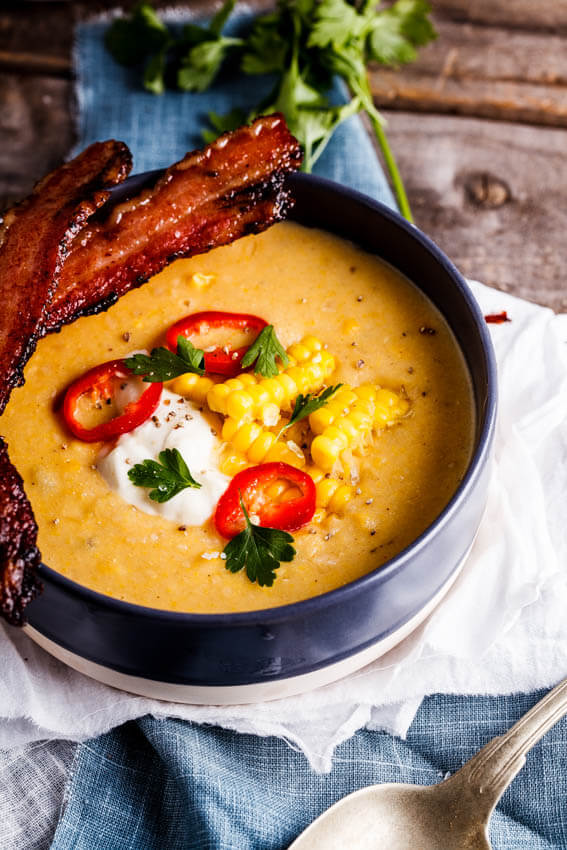 How do you make corn chowder with fresh corn?

The key to getting the most of the corn flavour though is to make a stock from the fresh corn cobs. Boil the shucked corn until cooked through then remove them from the water, sliced the kernels off the cobs and return the cobs to the cooking water with bay leaves, a sliced onion, white peppercorns and smoked salt. Allow to simmer and reduce for around 20-30 minutes until all the flavour is sucked out of the cobs. I have to thank Serious Eats for this tip as it made all the difference to the finished chowder.

After straining the stock, return the pot to the heat and sweat off some onions, garlic, potatoes and the corn kernels in copious amounts of butter before adding back the stock. Simmer again then add milk, a squeeze of lemon for brightness and more seasoning before blending half of the soup to create serious creaminess.

And then comes the genius part. I served the soup with crispy bacon dippers. Because bacon. And because if dipping crispy, fatty, salty bacon into sweet, creamy chowder doesn’t make your mouth water, who even are you? Serve this chowder in generous portions topped with a dollop of sour cream, a few sprigs of parsley and some thinly sliced chilli for heat. You can thank me later. 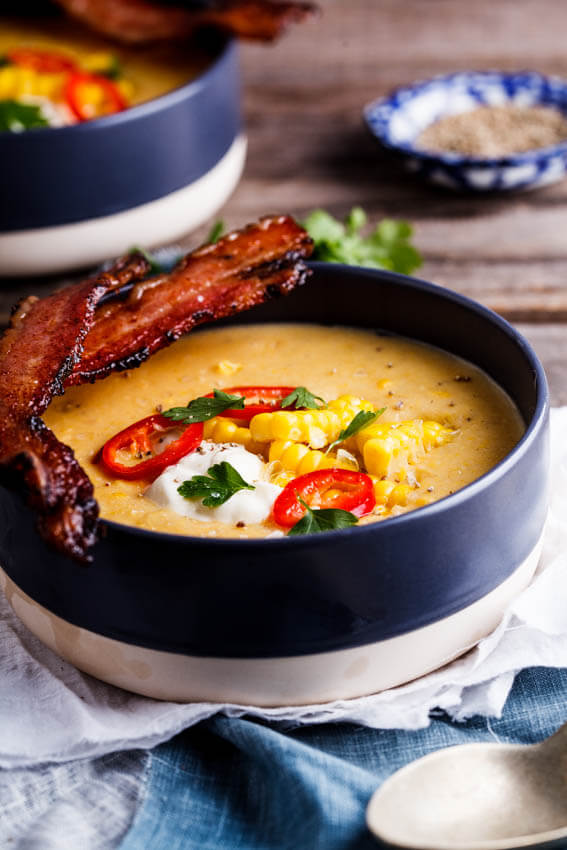 How do you thicken corn chowder?

Blend half of the soup to add creaminess and to thicken the soup. The potato in the soup adds as a gluten-free thickener but if you want an even thicker chowder you can add more potato or thicken with cornstarch/cornflour mixed with water. You can also use a roux (butter and flour cooked together) to thicken any soups, stews or chowders. 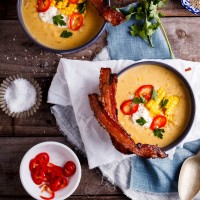 for the corn stock 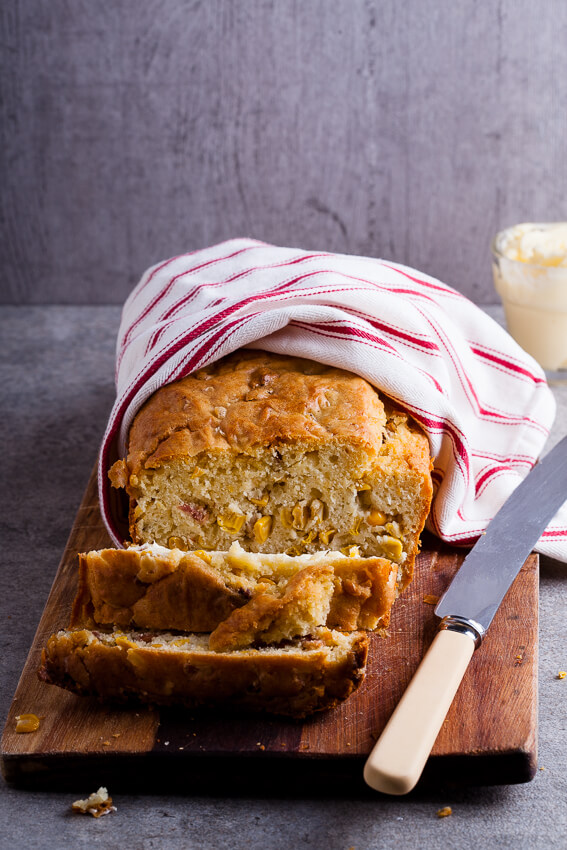 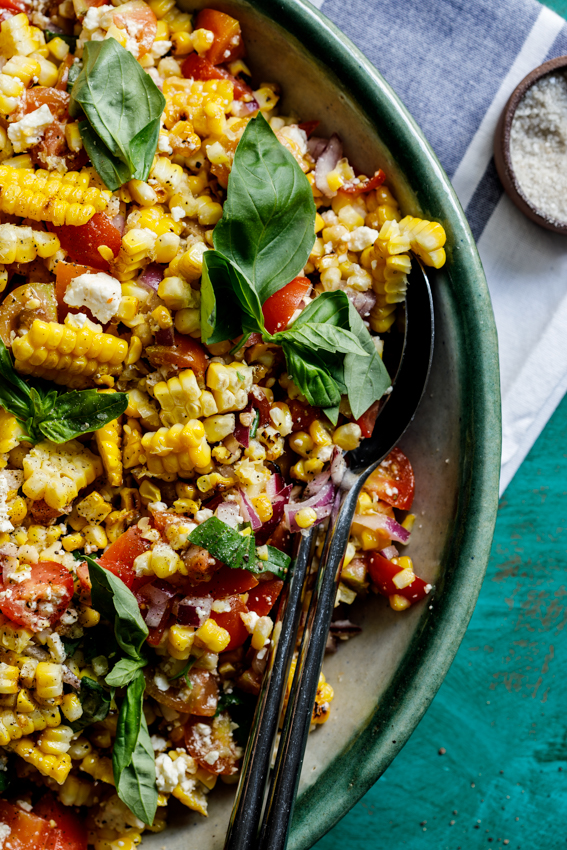